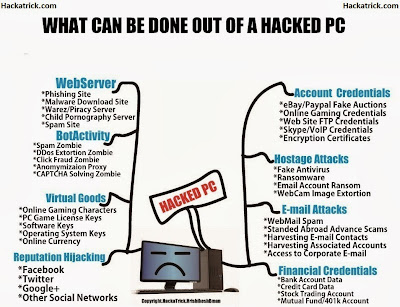 Some wild People Say “Hey! I Just Hacked a PC!”, Some may just fake it but some may really have done it. So, What Do They Really Mean when the say that? This Article Will Discuss about In How many ways a Hacked PC Can Be Used, And in later articles I’ll be explaining about each attack and how it works.

First Of All, a PC can be hacked in many ways, It maybe a PC/Server Whatever. But Once it’s compromised, that particular PC becomes the paradise of the attacker. There’s a whole lot of harm that an attacker can do to your PC, Yes! Your PC/Mobile That’s connected to the internet can be compromised! That’s why Always Keep you Antivirus Updated.

A Broad View of All the Attacks Takes me to 8 Categories,

So, That’s the prime 8. Take a look at the infographic that i made for a brief details of each.
In the Further posts, I’ll explain how these attacks work with linux machines, because I am not really a very big windows fan. Also Windows Machines are most Vulnerable to these attacks!
So, This post was all about you knowing what kind of threats exists, and the first and a best step a normal PC user can take is update the antivirus software regularly.