Cybersecurity has become the new forefront of technological innovation. With the world, rapidly moving towards digitizing our everyday objects, securing them against unwanted usage has become a challenge. Made possible by the advent of cloud technology and advanced computing programs like artificial intelligence, data security is the next big thing that everyone is looking up to and OSCP certification is one of the first steps to take if you are keen on making a career out of it. Here in this article we will discuss in details on OSCP and OSCP certification guide. 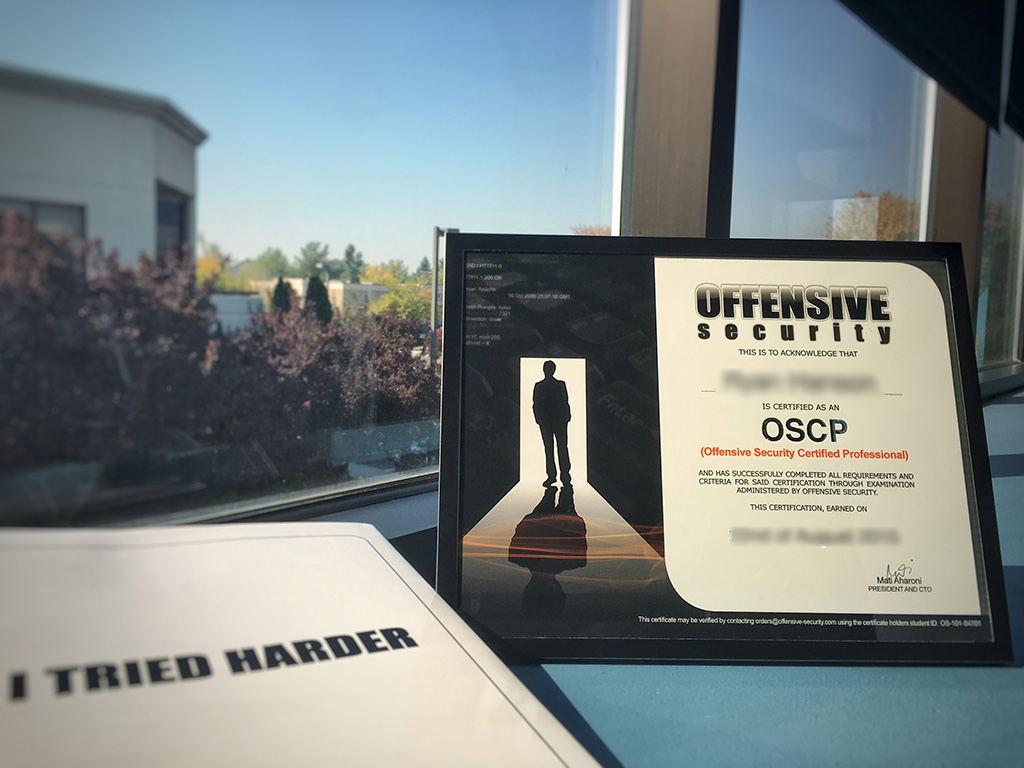 Moreover, the OSCP examination is not only about answering questions but it also demands the candidates to showcase their endurance capability.

The Internet never sleeps, and anything connected to it will always stand exposed to a person or a machine with malicious intent and for someone who is responsible for securing the interconnected systems sleeping might not be an option. And this also means that this certification program can only be passed by those who are dedicated enough in their efforts.

Further, this certification program can be taken up by anyone either a fresher or someone who is experienced just to sharpen their skills.

Who provides this OSCP certification?

The OSCP certification is provided by the Offensive Security Ltd. founded by Matt Arahoni who is also the creator of one of the most popular variants of Linux, the Kali Linux along with his team.

Established in 2006, Offensive Security Ltd. has been constantly working on penetration testing and their certification is acclaimed to be the hardest to achieve. Thus, making it’s cybersecurity training program a highly respected one in the IT industry.

Here are the five cybersecurity certifications which they offer:

The best part about these certifications is that there are no prerequisite exams that you need to clear for doing these courses. The only advice here is that you start from the very basic i.e. with the OSCP certification before moving up to the last and the most advanced stage i.e. the OSEE certification. Also, learning about Kali Linux could be an added advantage while taking up any of these certifications.

What’s the cost of the OSCP program?

The OSCP certification program can cost you around $800 and the fees for the rest of the courses ranges between $450 to $1400 excluding the OSEE certification as its course fee isn’t listed down on the website.

Further, you can choose to extend your access period on their virtual training environment which they call the proving ground by paying around $200 to $650 for an additional 15 to 90 days. The proving ground comes bundled with the courseware itself where you can practice your network penetration and security skills.

Since now you know the initial details about the course, let’s learn about how the course is and what are the things that are taught there over the course of time.

What’s there in Offensive Security Certification?

The OSCP certification consists of 5 hands-on modules or tests that validates the aspirants’ ability to handle the real-world scenario. This program covers the general security issues and is the best entry-level certification program that one can choose to begin their career.

In this program, there are four exams in total where two of them approach security from two different angles i.e. cracking the perimeter and windows exploitation, and the other two deal with specific areas, web attacks and wireless security.

The Importance of Kali Linux

Here are a few categories of tools available in Kali Linux:

The availability of such tools makes Kali Linux a very important part of the entire Offensive Security Certification Program. So, it is highly advisable for aspirants to learn the basics of Kali Linux and specially the Kali Linux commands and play around with it very often.

Starting off with the –

This certification program tests the ability of individuals to perform penetration testing or simply pentesting in a real-world scenario. Here, they learn to identify weaknesses and loopholes that may persist in a network and try to fix them as soon as possible to avoid unwanted intrusions.

Here’s a list of skills that OSCP certification inculcates and validates in a candidate.

Candidates get this certification after clearing the 24 hours long proctored OSCP exam.

What are the prerequisite and recommended experiences for the OSCP certification?

Before you attempt the examination, you must clear out the Penetration Testing with Kali Linux (PwK) course which comes along with the course. Talking about the recommended experiences, you must be well versed with the Linux operating environment, Bash scripting basic Perl or python skills along with a good understanding of various networking protocols.

This certification program validates a candidate’s ability to deal with network vulnerabilities. Unlike OSCP, where it’s basically about pentesting, here the candidates get in-depth knowledge on the various possible loopholes that black-hat hackers may try out to get inside the system and this includes buffer overflows along with other issues covered in the OWASP Top Ten list.

Here’s a list of skills that OSCE certification inculcates and validates in a candidate.

Candidates get this certification after clearing the 28 hours long proctored OSCE exam.

What are the prerequisite and recommended experiences for the OSCE certification?

Before you attempt the examination, you must clear out the Cracking the Perimeter (CTP) course which comes along with the course. The rest of the recommended experience remains the same as the OSCP certification.

This certification is for professionals who want to test out their skills for creating highly secured web applications. The Offensive Security Web Expert certification is a newly added program where candidates learn to identify and fix various exploits that may exist in a web platform and can be used by individuals with malicious intention.

Here’s a list of skills that OSWE certification inculcates and validates in a candidate.

Candidates get this certification after clearing the 48 hours-long proctored OSWP exam.

What are the prerequisite and recommended experiences for the OSWE certification?

Before you attempt the examination, you must clear out the Advanced Web Attacks and Exploitation (AWAE) course which comes along with the course bundle. The rest of the recommended experience remains the same as its predecessors along with a solid understanding of networking protocols.

The OSWE certification program basically deals with wireless network security and fixing the vulnerabilities by auditing 802.11 wireless networks. Here, candidates must be able to simulate their own attacks in the virtual practice environment.

Here’s a list of skills that OSWP certification inculcates and validates in a candidate.

Candidates get this certification after clearing the 4 hours-long proctored OSWP exam.

What are the prerequisite and recommended experiences for the OSWE certification?

Before you attempt the examination, you must clear out the Offensive Security Wireless Attacks (WiFu) course which comes along with the course bundle. The rest of the recommended experience remains the same as its predecessors along with a good understanding of 802.11 wireless networking.

The OSEE certification is for professionals who want to sharpen their skills and display their mettle in researching and designing exploits through reverse engineering, assembly, and disassembly. Here, the candidates need to develop the same mentality as that of the attackers and should be able to penetrate a live windows machine while taking the exam.

Here’s a list of skills that OSEE certification inculcates and validates in a candidate.

Candidates get this certification after clearing the 72 hours-long proctored OSWP exam.

What are the prerequisite and recommended experiences for the OSEE certification?

Before you attempt the examination, you must take on the live, hands-on Advanced Windows Exploitation (AWE) course that is administered every year at the Black Hat USA conference. Rest in recommended experiences as the course name itself implies, the candidates need to have an expert level understanding of all the things which they have been following up since the OSCP certification program.

Difference between OSCP and CEH. Which is better and why?

When it comes to network security courses OSCP isn’t the only one out there. Certified Ethical Hacker Certification or CEH bestowed by the EC Council is also one of the pentesting certification programs that candidates can look upto.

However, unlike OSCP, the CEH certifications require individuals to pass an approved training course or have at least two years of experience in the security domain.

The CEH examination covers 19 domains taught during the course and spans over 4 hours. Though OSCP is mostly a practical exam, CEH has 125 MCQs with 70% required to pass the test.

As far as which one would be better for you, both OSCP and CEH would help you understand about pentesting with OSCP putting more emphasis on hands-on learning rather than reading a book. But if you’re someone who is looking forward to joining any Government agency or the forces, then you can take up CEH since it’s recognized by the DoD.

Difference between OSCP and CISSP. Which is better and why?

Certified Information System Security Professional or CISSP is yet another certification that candidates can look up to. This certification is offered by the Information Security Council and focuses more on the leadership & operations aspect of cyber security. For this, it is also known as one of the world’s premier cybersec courses.

However, this course is not recommended for beginners as it’s more about sitting at the top and looking after things going around. In OSCP, you learn how things work and get on with it as you’re trusted to stay vigilant round the clock in case of any adversities.

CISSP just like CEH is best for experienced professionals who want to scale up from their current position or join government agencies.

Is there any renewal or recertification required in OSCP?

From sources on the internet, we could say that OSCP does not require any renewal or recertification due to the fact that the courseware revolves more around the methodologies of creating a secured system rather than technologies that may become obsolete in the coming years.

What’s the salary after OSCP?

The salary may vary depending on your organization or your level of experience. But according to Payscale, the average salary is around $91k.

Here’s a list of salary that they have put up in their website for various roles employing OSCP certified individuals:

With the world becoming more and more interconnected each day, keeping networks secured has been word of the mouth for every organization and government. Hence, there’s a growing demand for professionals who can tackle the various issues and fix them without delay. Here, you’ll get a sense of responsibility since you’ll be entrusted to keep user data of millions of people safe, hence making it a challenging and rewarding career option at the same time.